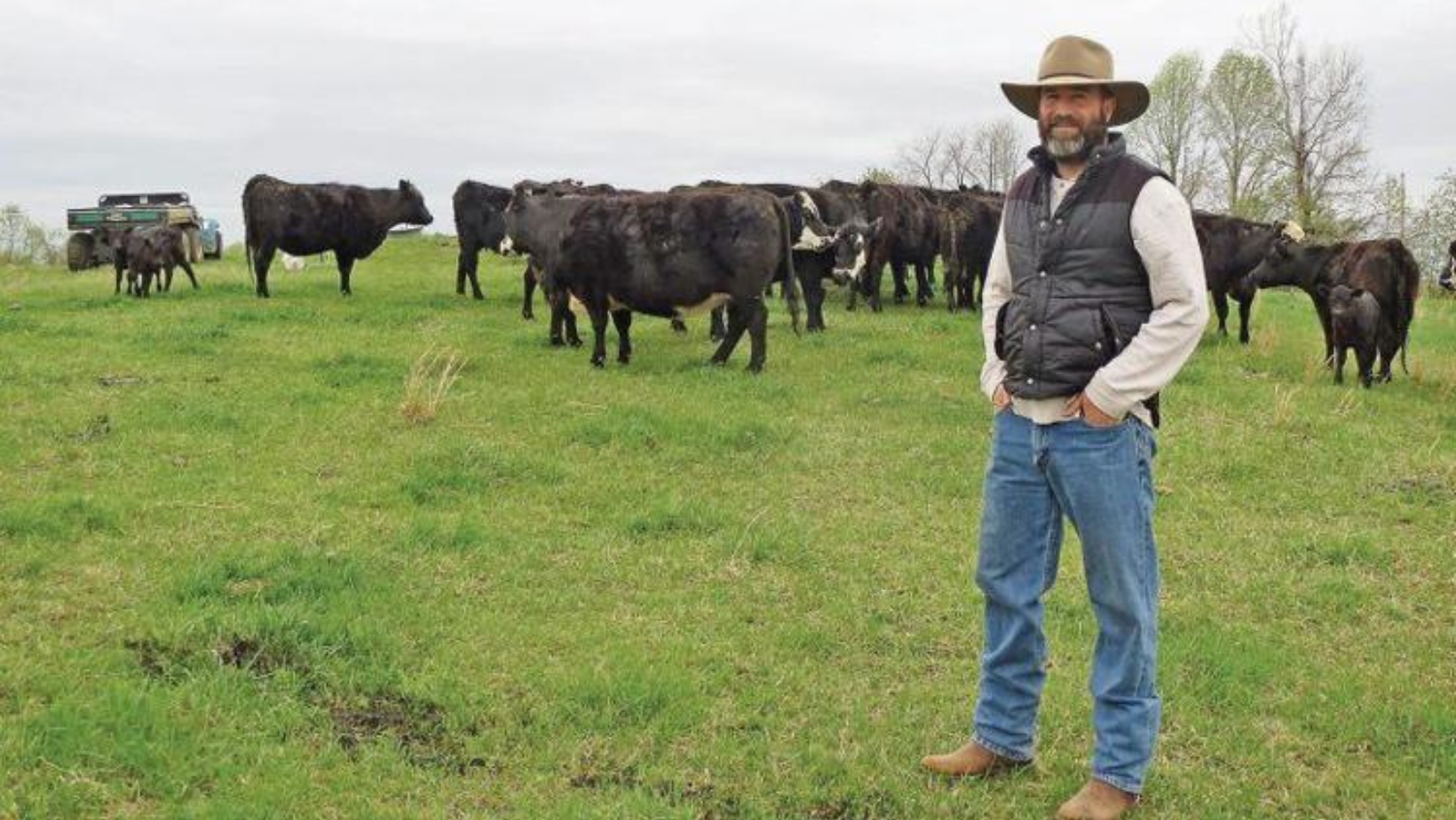 When Jason Leavitt went to college, at the behest of his farming grandfather, he didn’t know at the time the lure that farming and returning to the farm would hold. Leavitt and his mother, Judy, not only continued the family’s farming legacy in Owings, Maryland, but have expanded on it. Along the way, Nationwide and agent Carrie Polk have been on their side to help this farm family that’s trying to leave the land better than they found it, all while providing quality products and (fun) services to customers.

Wilson Dowell Farms is a fourth-generation, 320-acre family farm in Calvert County. They raise pasture-raised meats and grass-fed beef, and practice rotational grazing. The Leavitts sell meat shares direct to consumers, with some cuts available for walk-in at the farm. Today, Leavitt and his wife, Kristen, manage the farm, while Judy oversees day-to-day operations and manages Double J Stables, a horse boarding operation, which is also located at Wilson Dowell Farms.

“Ever since I was a kid, I wanted to work on the farm,” said Leavitt. “I enjoyed helping my grandfather cut tobacco, grind corn, feed cattle, move hay bales, fix fences, plow fields … it was more a series of fun activities than work. My grandfather always kind of tried to dissuade us and told us that we needed to go to school and learn something so that we would not have to “work” for a living. I don’t think that he meant work, per se, but maybe to avoid manual labor jobs.”

So that is exactly what he did. “It’s somewhat of a typical story, I think, when growing up we all wanted to get out and see the world,” said Leavitt. “Once I got out in the real world, it served to confirm how special the life was that we had growing up. After college, I decided to move back home, try to figure out a way to keep the farm viable, and, honestly, I was looking forward to the challenges that modern-day agricultural production presents.”

An Honor to Carry on the Family Legacy
The farm is named after Leavitt’s grandfather, Wilson Dowell, Jr. It began like most Southern Maryland farms: as a tobacco farm. While tobacco was the cash crop, Dowell always kept cattle on the farm. When the time came to transition out of tobacco, the foundation for a pasture-based livestock operation was already in place. Now the farm sells beef, pork, and goat.

Leavitt complemented his mother’s enterprise of horse stabling on their family’s land, by managing more production agriculture with a focus on beef production and high-quality forage.

“My great-grandfather bought the land for the farm where I now live in 1939,” he said. “He was a bit of a handyman and would buy fixer-uppers, get the farm in shape and then sell it for profit and move to the next farm. Eventually my great-grandmother had enough of moving and laid down the law to stay put. As the oldest son in a family of eight children, my grandfather took over the farming operation as his father aged. He raised primarily tobacco, small grains, and always had cattle. The cows were fenced in the woods and in fields that were too steep to cultivate.”

Leavitt continues, “When my grandfather passed in 1996, my mother assumed the family farming mantle. While I was still in college, she began a horse boarding business in addition to the cattle/hay operation and rented out our fields to a local farmer for his small grains operation. After college, I wasn’t exactly sure what I wanted to be when I grew up, and after a couple of years decided to move back to the farm. Initially, I thought that boarding horses was going to be the sole answer in creating a sustainable farm business on our property. It was soon readily apparent that while boarding horses provides a decent supplementary income, it is not feasible or sustainable in its own right as the principal operation for us. We had to diversify, so we created both Double J Stables, LLC, and Wilson Dowell Farms, LLC, in 2010.”

Top Production Priorities on Wilson Dowell Farms
Leavitt said the most important aspect of their farm and its entities is growing premium, quality forage. Not only do the grasses provide feed for the horses and, more importantly, for their grass-fed beef, but they also protect the soil.

“Currently, pastured forage is the only crop which is grown on the farm. There are approximately 160 acres of pasture on our farm, consisting of native forages, endophyte-free tall fescue, orchard grass, and warm-season annuals to supplement the summer grazing program,” Leavitt said. “Our focus is generating organic matter to increase the quality of our soil profile, mainly using rotational grazing of our cattle.”

Leavitt, also a project engineer in the Calvert County public works Capital Projects Division, put on his engineer hat to grow the farm sustainably. “I was intrigued by the successes and farming practices used by Joel Salatin on Polyface Farms in Swope, Virginia,” he said. “I immediately bought all of his books and was fascinated by the concept of rotational grazing. We currently utilize a modified version of his farming model and I believe that so far it has been successful.”

The boarding component of the Leavitts’ business is geared mainly toward trail riding. They offer full care stall/field boarding for their equine clients, have over 11 miles of trails on the property, and have an outdoor grass ring and round pen for their patrons’ use.

Rounding out the Leavitts’ top three farming priorities is the beef (and other meat) production and sales.

“This vocation provides the freedom to cultivate a source of food that I helped to create in any way that I choose,” said Leavitt. “I believe that people should have access to high-quality local food that is produced in a way that aligns with their personal beliefs. Whether that production method includes GMO/non-GMO, organic, non-organic, or grassfed/grainfed, I feel that it is our duty as farmers to provide the highest quality options to the residents of our nation, state, county, and local communities regardless of the specific production details.”

Leavitt’s twin brother, Justin, and his aunt and uncle (who all also live on the farm) are very helpful in working cows, putting up fence and whatever needs to be done. His dad mows the majority of the non-pasture grass and helps to keep the farm looking clean. “It truly is a family affair,” he adds.

No Farm is an Island: Nationwide Helps with Protection, Growth

Helping Wilson Dowell Farms to continue to be as productive as possible during times of adversity is their Nationwide farm policy and agent Carrie Polk of Carrie Polk Insurance, based in Prince Frederick, Maryland.

“Besides two other weather-related claims we had to Nationwide that were handled wonderfully for us, my mother was involved in an accident while trailering some horses. The Readers’ Digest version is that a Porsche driver passed mom’s truck and trailer while lanes were condensing, so the driver clipped mom’s truck, spun out and slammed into the guardrail. The driver was not happy with the settlement amount, a calculated loss offered by Nationwide, and decides to sue Mom, the farm, and even entities that do not exist in an attempt to recover millions of dollars in damages. In a jury trial, the Nationwide-appointed attorney wins the case, mom is found not guilty, and the driver recovers nothing. In a way, I am glad that the driver was being greedy and did not accept the settlement offer – since my mom was not at fault. I can imagine that it was a nerve-wracking experience going through depositions and anxiously awaiting trial, not to mention the stress of testimony. Both Carrie and Nationwide’s attorneys were unbelievably helpful and supportive of my mom through this process.”

“There’s a reason why you work 10-hour days and 60 hours a week in this business at times,” said Polk. “My farm families really are like family. Some of my best appointments are at the kitchen table, seeing what’s important to each family, what keeps them up at night. It’s not just about protection, either; it’s about insuring the growth. I ask, here’s where you are today; where do you want to go?”

“Nationwide is not the cheapest insurance company in the business,” said Leavitt. “However, sometimes in life, you get what you pay for. The peace of mind provided by knowing how Nationwide has taken care of us in the past and will be there for us in the future, to me, is absolutely worth every penny. Mom and I meet with Carrie at least once annually to review our coverages, discuss equipment inventory, and assess our farm operations. I don’t believe that there is a better agent (or person for that matter!) in the insurance business for us.”

“Everyone is concerned about price, but price means different things to different people,” said Polk. “I have to carry professional liability and I have a responsibility. I try to build a policy up and then take things off, so someone doesn’t inadvertently forget to add something. I try to take costs off while not compromising coverage. A farm is not a typical home coverage situation. There are extra things to consider, like cargo coverage for hauling livestock. You pay now, or you pay later — I say this all the time: Mother Nature is going to win.”

“Farming to me is an honest living, meaning that you have the ultimate responsibility of performing a myriad of necessary tasks in a timely manner to attempt to ensure a quality product,” said Leavitt. Echoing what Polk said, “Mother Nature is not always a reliable business partner! In this vocation, devotion is required, and shortcuts are not an option. I feel that you must be consistent or you will not find the path to a sustainable product. We have been with Nationwide since 2010 and plan to stay with them, one of the many tools in our toolbox to help us ensure our end quality products.”

Please visit www.wilsondowellfarms.com for how to order meat, and to learn more.