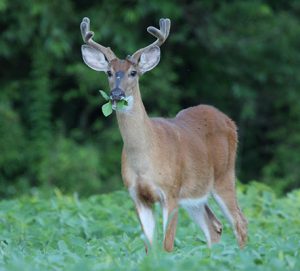 On July 25th , the Maryland Department of Natural Resources (DNR) staff rolled out the new Agriculture Deer Cooperator Permit (DCP) at a workshop hosted by the Maryland Farm Bureau. More than 50 members were in attendance. DNR staff started by explaining the DCP and who is eligible to apply for the permit. After some discussion of what was allowed under the permit, DNR went into the permit process and detailed the different components of the permit from the written test to the shooting proficiency test to the components within the operational plan.

Farmers asked questions about why the permit was only good for February and March. DNR explained that during the process over the last year of creating this permit, most stakeholders felt this was an optimal time to address deer over-population while minimizing the interaction with the general public, as well as still being cold enough to effectively harvest the deer for proper food consumption.

Prior to the creation of this permit, there was already a Deer Cooperator Permit available. The primary use of the original permit was to authorize sharp shooters to address problem deer in neighborhoods as well as parks and other public lands.

The Agriculture Deer Cooperator Permit does not replace the Deer Management Permit (DMP) that most farmers use today to try to address crop damage caused by deer. This new permit is another tool in the tool box for the farmer to use when the DMP isn’t working. The primary differences between the DCP and DMP are:

Maryland Farm Bureau appreciates the willingness of DNR to work with farmers to try to create safe but effective tools to help the farmer address the deer damage on their farms. MFB will continue to work with DNR to locate the deer “hot spots” around the state to work on site by site tools to try to address over-populated deer herds.

If you have a farm that has significant deer damage, email Colby Ferguson, Government Relations Director at cferguson@mdfarmbureau.com with the location of the farm and any photos/yield maps that can verify the damage. MFB will work with DNR to get someone out there to see what can be done to relieve the deer pressure.