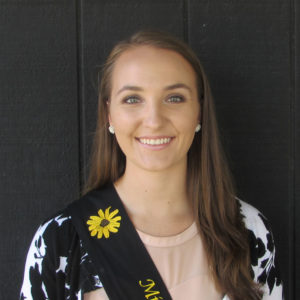 “I live on a farm where I raise dairy goats, horses, rabbits, chickens, and ducks. I am a 10-year member of the Cecil County 4-H program. I am also an AGsploration teacher and have had the opportunity to teach agriculture on the local and national levels.”

Lexy was selected as the 2018 Miss Maryland Agriculture 4th Runner-Up, so she will be be representing the agriculture in her county and the state throughout her year as a Miss.

Education at the Maryland State Fair

Since 1879 the Maryland State Fair has been home to a variety of educational opportunities designed to further expand the knowledge of its visitors and exhibitors. For the past 139 years, the state fair’s mission has been “to encourage the educational growth of youth by providing a venue where they can showcase their skills; and, to educate the general public regarding agriculture, itsrelated fields and its importance to our future.” With that sole mission in mind, the Maryland State Fair has brought the farm to the public in the best way possible.

Local farm fairs are one of the few public events that bring the farm to the public. For many individuals, the fair is the only time they get the opportunity to directly interact with those who produce their food and other products. It is also the only time they get to see how their food goes from the field to the table and some of the machinery that goes into it. At the Maryland State Fair, educational displays such as the milking parlor and the birthing center are just two of the many fair exhibits that show the public different aspects of livestock production. As for fair exhibitors, skills developed such as working with the public, raising and showing livestock, and helping out around the fair all contribute to creating future generations of farmers and agricultural educators.

While to some, the state fair may just be a place to eat greasy food and ride rides, it is actually one of the best ways of educating the public about agricultural practices and their importance to our survival. While it may be just a small portion of the agriculture industry, the state fair does its best to cover the basics and to present them in a fun and exciting way. Without the state fair many individuals would not have any knowledge of agriculture or its importance.

Genetically modified organisms are possibly the most controversial and misunderstood aspect of agriculture today. For many, the lack of education has led them to believe that GMOs are incredibly harmful to both them and the environment, when in reality, GMOs are beneficial to the environment, farmers, and consumers.

GMOs are genetically engineered to resist insects and various diseases, meaning the farmer is able to use fewer pesticides on their crops. Genetically modified crops are also engineered to be more water efficient, thus leading the farmer to use less water in their production. GMOs are also growing at more productive rates than traditional crops; meaning less land is needed to feed the country. Overall, genetically modified organisms help farmers reduce their ecological footprint and improve crop efficiency.

On average, an American family spends 10% of their monthly income on food. The United States provides the highest quality food for the lowest price, partially because of genetically modified organisms. Since farmers are losing less of their crops to insects and drought, they are producing more crops with fewer inputs. If they had to deal with insects consistently damaging crops, they would have to produce more to make up for the lost product. If they have to produce more crops the prices of commodities will increase for consumers.

Despite the beliefs of many, genetically modified organisms are safe for consumption and safe for the environment. Studies have also shown that they have the same nutritional value as traditional crops. Without GMOs the U.S. would most likely not be able to feed its people at the lowest cost while reducing the size of its ecological footprint.