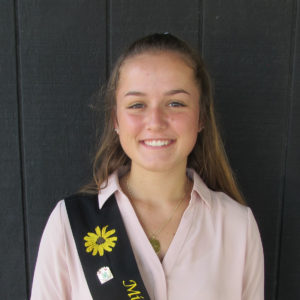 “I reside on my 4th generation family beef and dairy farm. On the farm, I mostly take care of the beef cattle. I am also involved in 4-H and FFA. In 4-H, I show beef steers and market lambs at the Allegany County Fair. My FFA team will be representing Pennsylvania in the Meat Evaluation contest.”

Genetic inheritance was first discovered by Gregor Mendel in 1865 when he did experiments with cross breeding peas. About 100 years later genetically modifying organisms began. The first GMO was made in 1973. Herbert Boyer and Stanley Cohen used an enzyme to cut a plasmid at a single point so that they could insert a gene that was resistant to the kanamycin antibiotic. This made bacteria that could survive the presence of kanamycin. From then on, more organisms began to be genetically modified.

Today, people do not realize it, but we need GMOs. We do not notice how much of our food is genetically modified. If we did not have GMOs, farmers would not be able to produce enough food for the amount of people that need fed today. By making GMOs, we can make more of and a better product. Eating genetically modified food will not hurt you. The modifications done to the food has to be approved by the US and everything is on the food label. Personally, I support GMOs because I think they are here to help us and not hurt us.