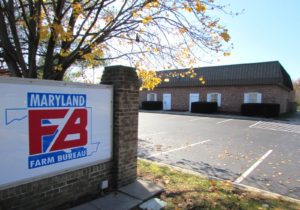 Maryland Farm Bureau is a private, non-profit membership organization. It is completely controlled by its members through the democratic process and is financed by voluntary membership dues. Its strength comes from the active participation of over 26,000 member families that belong to the state’s 23 county Farm Bureaus. The American Farm Bureau Federation represents over 6.2 million member families in over 2,800 counties.

Farm Bureau’s purpose is to increase net farm income and improve the quality of life by providing a legislative voice, increasing public understanding and promoting member involvement. The organization helps members accomplish their goals together – something they cannot do alone.

The organization’s vision statement reads, “Maryland Farm Bureau shall be recognized as the leading voice of Maryland agriculture and the predominant force in agriculture policy development. Maryland Farm Bureau will be regarded as the most credible source of information and the strongest advocate of safe, environmentally responsible and economically sound food and fiber production.” 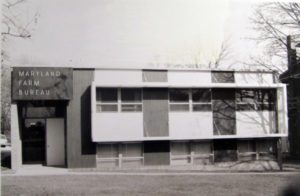 Seven commodity organizations joined alliances in 1915 and formed the Maryland Ag Society. Their purpose was to form a state board of agriculture and their objective was agriculture education in the public schools. Colonel A.W. Sisk served as the acting chairman. S.M Shoemaker was elected president with T.B. Symons as secretary. Discussions concerning affiliating with the National Board of Farm Organizations began in 1919.

But in 1920, the group decided to affiliate with the American Farm Bureau Federation. E.P. Cohill, later elected the first president of Maryland Farm Bureau, was selected as the first delegate at the national convention. He also was elected to serve on the resolution committee of that convention where 33 states were present.

During the first five years, consumption, sales tax, brucellosis eradication and establishing property taxes based the land use were hot items for discussion. At the annual meeting in 1922 the new name of Maryland Ag Society/Maryland Farm Bureau Federation was adopted. The following year, reorganization was officially adopted and 13 counties paid dues to the organization.

In 1923, it was decided that the membership would include the entire family. The role of women was recognized and the Home and Community Committee was established. It was later named the Associated Women, then the Women’s Committee and now is referred to as Farm Bureau Women’s Leadership Committee.

Commodity marketing played a key role in the development of the organization. The Farm Bureau Co-op’s that were founded under the Agricultural Corporation of Maryland were sold in 1934 to the Virginia Seed Company, a company known today as Southern States.

The publication of the Maryland Farm Bureau Co-op first began in June of that year. Later in 1925, Co-op Purchasing bought out the Agricultural Corporation and the county Farm Bureaus went through reorganization and an effort to organize the last five remaining counties began. By 1927, the American Farm Bureau’s publication, The Bureau Farmer, was made available to Maryland members.

The Maryland Farm Bureau Newsletter was produced from 1936 to 1952 and then became the Maryland Farm News. In 1970, the Northeast Agriculture publication was introduced which evolved into its own Maryland edition called Maryland Agriculture in 1983. In the early 1990s, Spotlight took over as the state’s communicator to farmer members. A quarterly full-color, glossy magazine to educate and communicate with all members of the organization, My Maryland, was published from 2007-2014. The current newsletter, Chesapeake Bay Farm & Food, is a full-color print that took the place of Spotlight and is sent quarterly to all members.

The discussion group program started in 1938, with 31 groups forming that first year. Of the original 31, four still continue today. Those groups have contributed several state presidents and county presidents to the leadership of the organization. The 1940s and 1950s saw the beginnings of the Young Farmer program, then named the Associated Young People. Several counties boast strong Young Farmer Committees and the state committee is a breeding ground for future leaders.

The lot in Randallstown, MD was purchased in 1958, under the leadership of Randall Spoerlein. The office was built in 1959. Maryland Farm Bureau purchased the Records and Tax Program from Federated Business Systems in 1964 and that continued into the early 1980s. In 2014, the building was sold and Maryland Farm Bureau moved its headquarters to Davidsonville, MD to be closer to Annapolis and Washington D.C.

The board of directors adopted an expanded program which included Service Company, the Accidental Death and Dismemberment Program and the Reward Program in 1966.

The need to increase human and financial resources for the organization was recognized under the leadership of Willard Oakley. He guided the organization to expand membership by including agribusiness and associate members.

Recording memberships began in 1920 – there were 500 members. During the war years, with many young farm men on foreign soil fighting battles, the membership roles declined. But as the conflicts concluded, memberships almost immediately swelled. The organization grew to 14,668 member families in 1987 and then continued major membership booms in the 2000’s. At the end of the 2012 membership year, an all-time high of 37,211 families were members.

All Maryland Farm Bureau members can take advantage of group savings and discounts through our partnerships with numerous companies and businesses. Among them are Nationwide Insurance, Benefit Design Group, Grainger, Griffith Energy, General Motors and Choice Hotels.